Tell Us How to Get In Touch

Step 2 of 2: Complete the form below.

Why should I care about the WCAG?


To really understand why the WCAG matters so much, you need to know who is behind them. The WCAG was created by the World Wide Web Consortium, known as the W3C. The W3C was founded in October 1994 in the halls of MIT’s Laboratory for Computer Science (MIT/LCS), when global web activity started soaring. Founding members included top scientists, and by late 2019, the organization has over 440 members including leaders from business, nonprofit organizations, universities, government entities, and relevant industries.

W3C’s originally focused on standardizing web protocols so that websites and web tools would be compatible with each other. Every W3C standard is reviewed several times, tested, and analyzed before it’s approved by members. Usually, W3C standards have 3 levels of compliance, from A to AAA.

Web accessibility was one of the earliest issues that W3C addressed. The first WCAG was published in 1999, but it was revised in 2008 as WCAG 2.0 and updated again in 2018 in the form we use today. 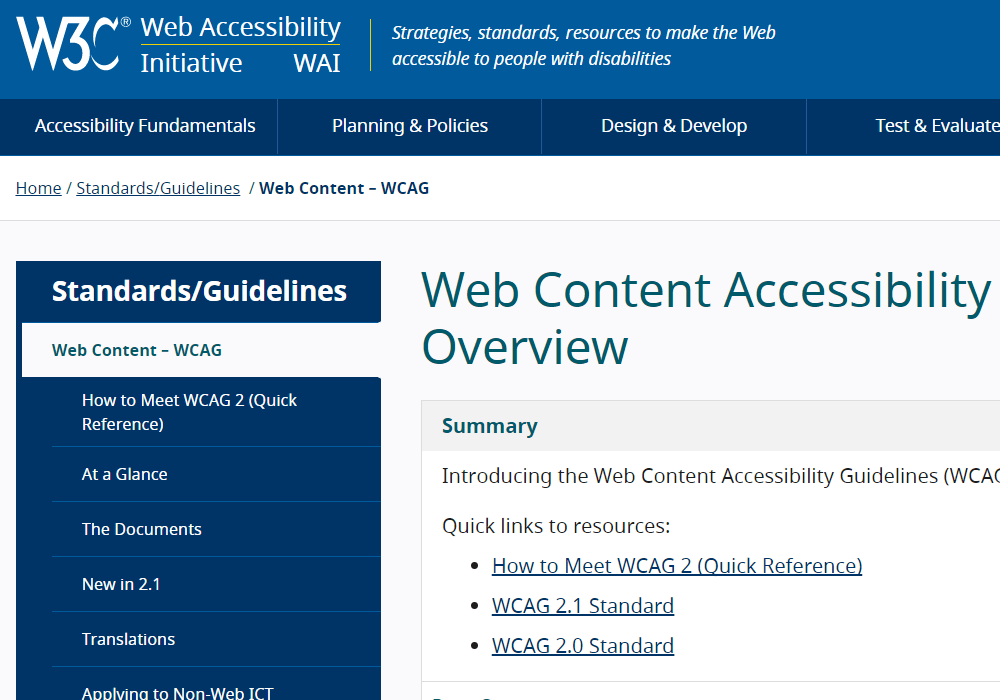 What are the principles of WCAG?

The full WCAG 2.0 is incredibly long and complex, with many different points and requirements, but they’re all based on 4 essential principles: perceivable, operable, understandable, and robust. Some believe that there's a WCAG 2.1 checklist but in reality, it is more complex than that. The first step for achieving WCAG Compliance, It's to understand It's principles:

1. Perceivable - this refers to the ways that users perceive content online through their senses of sight, sound,            and touch. This includes issues like captions for videos, text that can be adjusted for contrast, color, text size            and spacing, font, and similar factors that make it easier to read.

2. Operable - operability means the ways that someone can use the site. It’s particularly relevant to people                 with motor disabilities, weak muscles, injured limbs, etc. An operable site needs to be navigable entirely by             keyboard, sight-assisted navigation, and other alternatives to a classic mouse.

4. Robust - there are two factors for a robust site:

How does WCAG affect accessibility laws?

The WCAG isn’t a set of laws that can be enforced, but many governments have adopted it as the standard for their accessibility laws. Here’s a short overview of international accessibility laws that rely on the WCAG. Effectively, WCAG compliance is the best means for achieving compliance with most worldwide legislations.

In early 2018, the updated version of Section 508 of the Rehabilitation Act of 1973 came into effect. Section 508 requires that every online platform run by federal bodies or any organization that receives federal funding must be accessible for all users. Under updated rules, these sites have to comply with the WCAG 2.0 Level AA.

When individuals in the US have sued businesses with websites that aren’t accessible, under the Americans with Disabilities Act (ADA), courts have required those websites to reach WCAG 2.0 Level AA compliance. You'll often hear the term WCAG ADA Compliance. That means that the best way to comply with ADA is by following the WCAG.

In 2010, EU officials adopted WCAG 2.0 Level AA as mandatory for all official EU sites, and expanded that to all public sector web platforms and to include WCAG 2.1 in 2016. The E.U. also adopted WCAG 2.0 as the standard for the new European Accessibility Act (EAA), which will become law in 2025.

In June 2019, the Accessible Canada Act (ACA) was passed into law by the federal government in Ottawa. The ACA requires a large number of public and private sector sites to become accessible according to WCAG.

The Australian Disability Discrimination Act (DDA) was enacted in 1992 to eliminate barriers that prevent individuals with disabilities from accessing real-world workspaces. Over time, the governmental Human Rights Commission and other authoritative bodies in Australia interpreted the DDA to include online services. Official recommendations “strongly encourage” all businesses and services to meet WCAG 2.1 standards to avoid violating the DDA.

Israel Standard (IS) 5568 is an accessibility law that came into effect in October 2017. IS 5568 requires most businesses to make their sites accessible based on the WCAG.

Ignoring the WCAG Risks Legal Action, as it forms the backbone of accessibility legislation in most countries around the world, and it’s globally recognized as the most reliable and effective set of accessibility standards. If you comply with the WCAG, you can’t go wrong.

Get an instant complete compliance audit!

See how far you are from complying with WCAG 2.1 and the ADA